Standard Error Google Sheets Guide: Google Sheets is used worldwide to analyze significant volumes of data. These also include mathematical data and understanding the relationship between data from a specific sheet. While analyzing such data and making interpretations, you will need to find patterns and insights that are going to make your data more useful in the future.

In this guide, you will come across all the important facts about standard deviation and standard errors in Google Sheets. So now without wasting any more time, let’s just quickly jump into these amazing Google Sheets tips.

What Is the Standard Deviation in Google Sheets and How To Calculate It?

Now let’s take the following table as an example, where we have noted the marks of eight students on three different subjects in the following spreadsheet. Let’s see the steps to calculate the standard deviation for each of these subjects and also determine which subject has the most uniform marks. 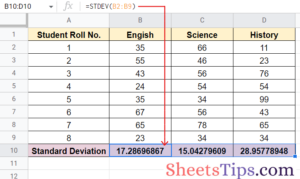 What Is the Standard Error of Mean in Google Sheets?

While translating this equation into Google Sheets, we can use the three formulas: STDEV.S, SQRT, and COUNT. The syntax of all of these formulas is as follows:

Now, let us see the steps to apply this formula and find out the standard mean error with an example: 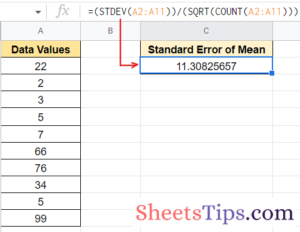 How To Do Standard Error Interpretation in Google Sheets?

1) Larger the SEM Value more spread out the values are: 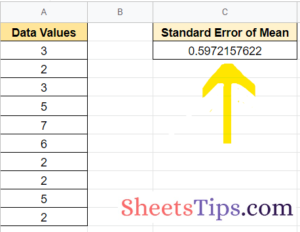 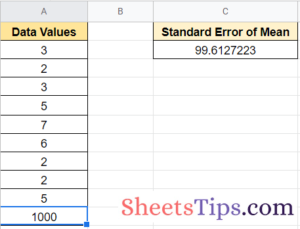 As the number of values increases, the SEM value will proportionally decrease. In the first sample dataset, there are 20 values in the dataset, while in the second one, there are only 9. This will make the SEM value change from 0.8386714776 to 1.490329255. If the extra figures were outliers instead, the SEM number would have increased.

How To Calculate 2SEM in Google Sheets?

To understand this concept better, we have a set of data with random values as an example. Here are the steps that will help you find the standard error of the mean in Google Sheets:

Standard Error bars are used in charts to visually show the error that can be expected with a given value. There are three main types of error bars in Google Sheets, namely, percent, constant and standard deviation. Here are the steps that you need to follow to insert a column chart to determine the standard error in Google Sheets: 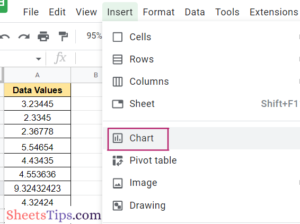 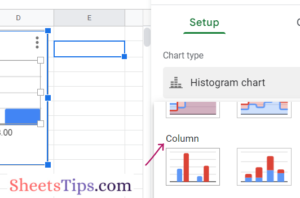 The above steps will insert a column chart that will look something like the one shown below. 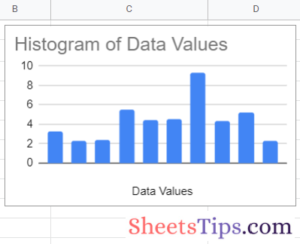 Now, let us see the steps to adding the error bars to this column chart: 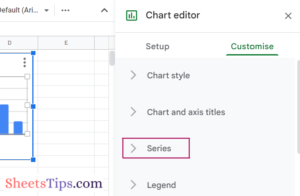 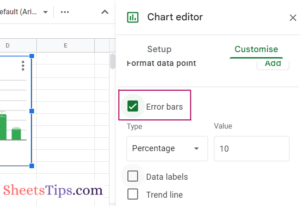 By following the above steps, you will see the error bars on all the columns of the chart where the evaluations are located at the top of the column bars. 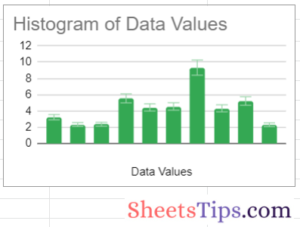 In the above example, we specified the error bar to cover +/-10% of each value in the column, which is also known as the percentage type of error bar.

How To Create Horizontal Error Bars in Google Sheets?

You know, you can always experiment with charts according to your preferences. Similarly, you can also insert horizontal charts into your data set. For this, simply first demarcate two columns that will represent your mean average and standard mean as per the steps already mentioned before.

Next, select the columns you want to display in the chart and follow the steps to insert the chart as mentioned above. Just select horizontal bars instead of columns and do the rest of the cell-specific configurations accordingly. 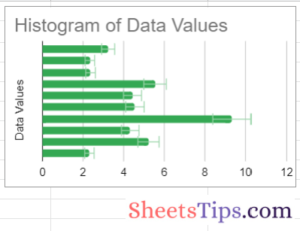