How To Build Onion Method for Complex Formulas?

To build an onion method for complex formulas, we will have to follow the one action per step approach. This means we will have to build our formulas in a series of steps.

Confused about how to do this? Well, don’t worry. We have outlined how to build formulas using the Onion Framework here.

Onion Framework consists of three important elements and they are outlined below:

This allows you to observe the formula move in a step-by-step manner, which is extremely useful when creating or trying to grasp complex formulas in Google Sheets.

Let us consider the following example where we have the organization’s name and list of available positions. If you see the dataset, it is unorganized. 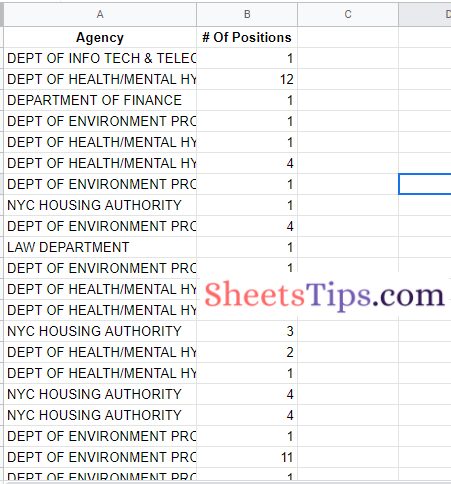 We can organize this dataset with the help of complex formulas using the Onion framework and summarise the job openings. The steps to get this done are outlined below.

Although this has no effect on the data, it’s usually a good idea to run a simple query first to confirm you’re using the proper dataset as the input to your QUERY function.

Now the next step is to filter out the blank rows. To do this, we will have to use the WHERE clause. This WHERE clause will be used inside the query function and GROUP BY clause as shown below:

In this step, we will have to fix the header of the total column using the LABEL clause. The formula to be used in this step is as follows:

Press the Return key after using this formula in Google Sheets and you will see the results being generated as shown in the image below.

Rather than utilizing a pivot table, we used the QUERY function to generate one. The key to making this work was to build it in steps, with the formula changing slightly with each step.

In this step, we are using the array literals. For this, we need to add a placeholder line in the total row and the formula for the same is as follows:

To get the right total, we need to convert this placeholder into an actual formula. We leave the range reference open-ended, much as the data provided to the query function, to guarantee that it remains dynamic and will automatically incorporate fresh data. So our formula in this step will be as follows:

Simply peel back the layers until the deepest function is disclosed. Copy the formula into a new cell and work your way up to the whole formula again, starting from the inside.