There are a handful of Google Sheets features that make it stand tall compared to other spreadsheets software. However, Google Sheets also have few limitations in file size, row or column limit, and so on.

On this page, let us discuss everything about Google Sheets Limitations so that you can use the spreadsheet accordingly. Also, with the help of Google Sheet tips, you will find one or another way to overcome these limitations.

What are the Limitations of Google Sheets?

Although Google Spreadsheets are highly powerful and convert easily from Excel, they have certain disadvantages discussed below.

The above limitations are further discussed in detail in the below section.

The maximum number of cells in a Google Sheets file is 5 million. These can be included within a single worksheet or spread over many pages. 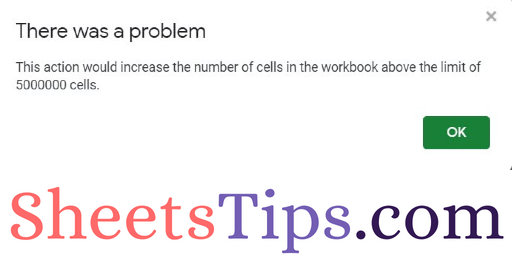 In Google Sheets, a spreadsheet may have up to 18,278 columns. Furthermore, even if your column number is less than 18,278, you will not be allowed to enter extra columns; if you currently have a large number of rows and exceed the 5 million cell limit. 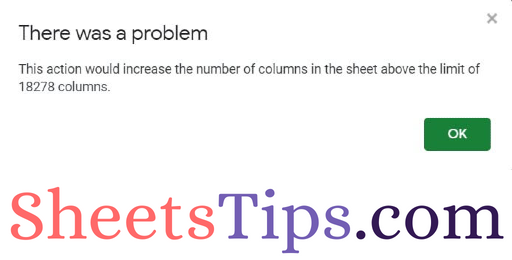 Previously, Google Sheets had a maximum of 40,000 rows, but that limit has been eliminated.

There is no tab limit, just like there is no row limit.

However, the number of tabs you may have in Google Sheets is limited to 5 million cells.

A new worksheet contains 26000 cells by default (100 rows and 26 columns). You can enter a maximum of 192 worksheets if you keep to the row and column limits in each sheet.

After that, you will get a dialogue box informing you of Google Sheets’ cell limit.

When converting a file to Google Sheets, the file size limit is 100 MB. The maximum number of rows in a file produced with Google Sheets is 5 million.

Like row, column, and file size limit, Google Sheets also have formula limitations which are explained below: