Google Sheets is one of the great tools that is used by all types of firms right from small-scale traders to large-scale businesses. Thus Google Sheets is one of the most widely used spreadsheet software, where we can various kinds of mathematical operations, organize and store data, and much more. With plenty full of functions in Google Sheets, we can also create a Star Rating system in Google Sheets. This rating system is widely used by Schools and corporate companies to rate their employees, students, staff respectively.

How Do I Add a Star Rating in Google Sheets?

On this page, we are using REPT and CHAR functions to calculate 5 star ratings.

Now let us assume the following dataset which consists of employee names in column A and their ratings in column B as shown in the image below. 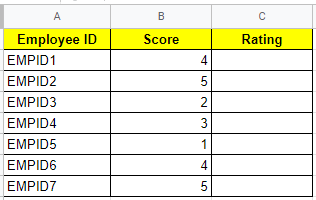 Follow the steps given below to create a star rating system in column C.

Now you will see the results as shown in the image below. 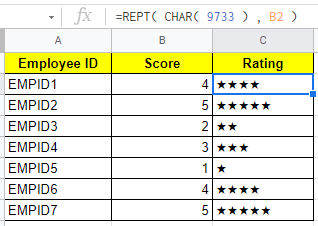 In our example, Column B contains a numerical value that represents the rating. Column C is where you convert that value into a more visually appealing star rating.

The star is created using the CHAR function, which returns a Unicode character based on a number. The REPT function is used in this case to repeat the star that corresponds to the rating value.